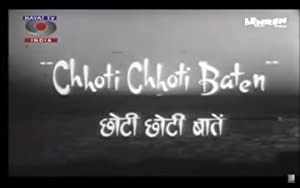 Movie Story in Short (Movie Plot): Motilal has worked hard all his life to make ends meet. He inherits money from a cousin, settles his family with a good amount and leaves on a journey, looking for inner peace. He arrives …

Chhoti Chhoti Baatein movie has been listed under N/A. This movie is directed by Motilal. The story plot and the script has been written by Motilal.

Chhoti Chhoti Baatein (1965) movie has recieved ratings as follows: IMD has rated 6.4/10, whereas Critics Score is N/A%. Also additionally there are ratings from Internet Movie Database 6.4/10. These ratings are as on date of the movie details posted here..